For my passion project, I recently started programming Pac-man through Unity. I found the tutorials in a previous class, and now with more time, I can finish this beautiful game. The tutorials I found are way beyond my current skill level. As he writes the code, he explains how everything works. The tutorial allows me to understand despite my lack of skill.

I downloaded the tutorial graphics in late January and managed to animate a playable Pac-man. The actual map took me ages to make; it was very tedious work to complete. The maze took me ten days straight; Slowly placing every tile was insane. Once I finished the map in class, I realized all the pellets were not prefabs. That means all 238 needed to be replaced by hand. It took me one thirty-minute video to finish. Afterward, there was still time in the video, so I placed the future nodes for the portals. In the tutorial, The Weekly Coder makes the pellets themselves nodes, which I prefer to separate from each other. I can also check nodes better when I inevitably mess them up. They are visible when playing the game, so it does ruin the aesthetic right now. Next week, I plan to make the nodes functional and playable with Pac-Man. You can visit my GitHub here.

The tutorial helps me, and I highly recommend trying them yourself. There are other games The Weekly Coder makes that you can make. The tutorials can be found here. Enjoy! 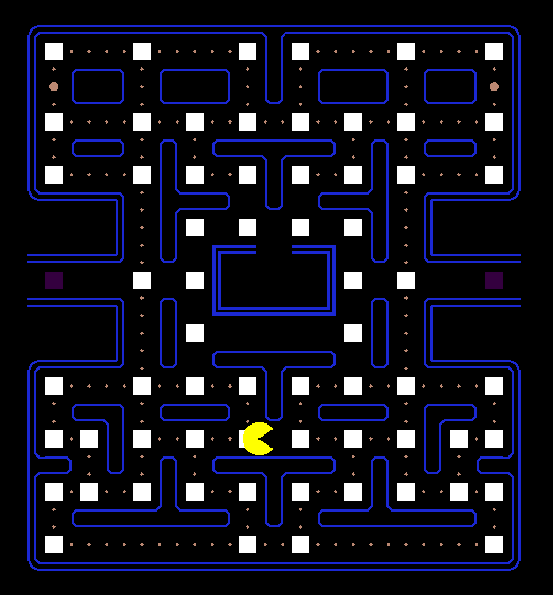 It has been a while since I opened this project. For some reason, I took a two-week break. I do not remember why or how; it just happened. Now, I needed to get work done fast to stay on track. So, when March began, I went ham. Of the tutorials, I completed 4 in a week.

I made the nodes know who and where their neighbors are. The player can go to the neighboring nodes assigned to its current node. After the mystery break, I made Pac-Man move to each node and not teleport node to node, and if the player wanted to turn around at any point, they could. Turning around was not an option in an earlier build. You can turn around, on the spot, instead of waiting until Pac-Man hits the next node. Lastly, I added portals, and they were a lot easier than I expected them to be. In the scene view, I made it so you can see the nodes without them showing up in-game. I also color-coded some of them for future uses, including the portals and ghost-only nodes.

If you want to work alongside me, the tutorials are here. If you are after my GitHub repository, it is here for you to download yourself. Enjoy!